Local Walks in Nunthorpe with Points of Interest (POIs) numbered

This feature of our website will allow you to select walks as you go around Greater Nunthorpe. As you walk you will see signs with our logo, a POI Number and a QR Code. If you point your smart phone camera at the code it will take you to the relevant part of the website where you will see more information eg old pictures, maps, historical information, or details of flora, fauna and natural features

Equally you can use our online maps of walks, with approximate distances and times for walks as well as where POIs and benches are located. Shortly we hope to have paper copies of the maps which you may find useful too.
PLEASE SEND IN COMMENTS on the use of the QR codes - all who do so will receive a FREE notebook and pencil

( Note that the memorial is surrounded by private property now but was originally owned by the Church – the Vicarage is the large building left adjacent to it was the Nunthorpe  Primary School, and around the site was an allotment. Picture below – the War Memorial with old school ( now a private home) and a pictures of children outside the school in 1914 and 1940. The  fallen commemorated on the base. 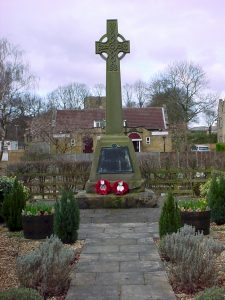 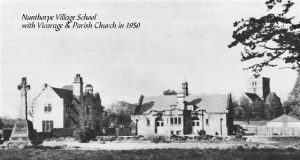 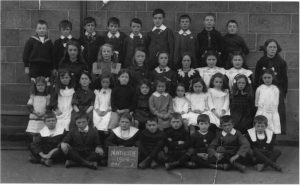 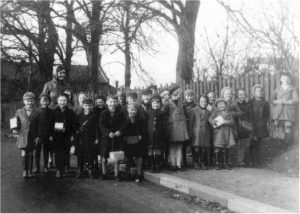 Turning left up Church Lane you will g0 past the site of the old Scout hut, just before the Church car park) – replaced by a house 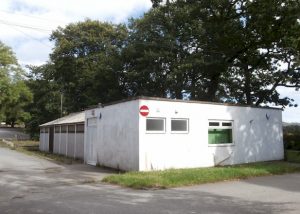 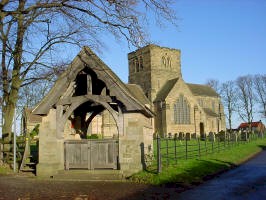 Inside the Lych Gate is the World War 2 Memorial 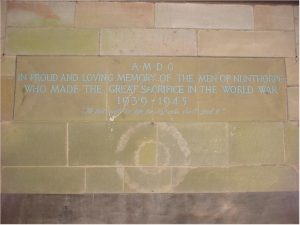 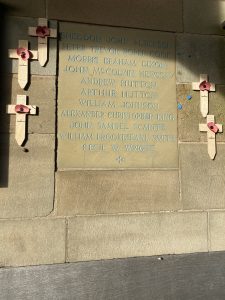 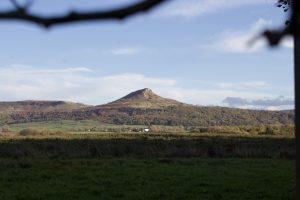 You are now entering private land though it has footpaths ( not bridleways so technically no right to ride a bike here) which are a right of way. Please stay on the clear footpaths and keep any dogs under control, preferably on a lead so they don’t walk on any crops or disturb any livestock which are in some of the fields you will come to depending on your route. 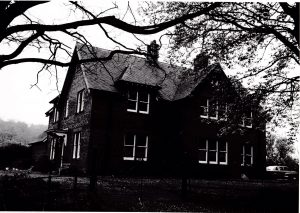 The Buckle family the current owners – were originally tenant farmers here from 1905. Sir Arthur Dorman had the farmhouse built but later bought Grey Towers. He sold this farm to a Belgian in 1930, but after the War, the War Department confiscated the farm from him as he had been a collaborator. The family bought the farm in 1950 and originally owned Thompson’s field ( in which they grew turnips).

The fields in front of you will produce wheat and barley which are used to produce anything from bread and beer, to biodiesel and ethanol.

Please keep out of the fields as they benefit us in the long run.

Redcar & Cleveland Council had these woods for sale for development . The woodland is off the market now! See – front page story.

An inventory of the trees in the wood Woodmoreinfo

Wildlife in the wood – and Nunthorpe – see https://ourgreenways.org/home/gallery/

This map is from Redcar and Cleveland Council – there have been suggestions of building houses here- but that is now removed!!

“I worked for Cleveland County Council from 1976-88 until I went into private practice.  While I was with the Council I worked for the Environment Team, within the Planning Department.  Part of the Team’s job was to design and supervise landscape contracts all over Cleveland.  The Nursery was set up by the Council in the late 1970’s, I believe, as a centre where all the trees and shrubs were delivered from the national wholesale nursery growers and stored prior to their being delivered out to the various landscape sites for planting.  It had a Nursery Manager and assistants and was quite well managed.  Because many were bare-rooted plants, they had to be heeled-in (ie put into trenches and their roots covered with moist soil).  The nursery was active for quite a long period of time but, I believe, it was run down and disused before I left and some of the trees and shrubs remaining were planted in and around the site (hence some denser patches of trees where groups ‘heeled in’ were simply left in situ.  These plants have developed into what we see today.

I received a reply back from Gwynne Smith in Guisborough on the history of Nunthorpe Nursery Wood- actually not a lot of info as his memory is now failing him.
Mr Smith was a gang leader on the Cleveland Council Urban Fringe Exercise in the early ’80s and collected and planted the whips and transplants as they came in from nurseries both around the area and from Banff and Buchan in Scotland. Some trees were also brought in from Holland, these are obviously some of the top grade trees I am seeing. Apparently Cleveland Council owned the land as an open field when he started working there. The land was probably bought from the Brunton family who owned a lot of farmland around this area.
Someone in the Council offices planned, estimated and ordered the number of trees required for each planting season and as they came in from the various nurseries they were heeled in, mostly quite close to the bypass entrance rather than the Morton Carr end. Every April or so it was found the number of trees ordered were more than actually used and they were left where they had been heeled in as they would not be used in the following autumn’s planting programme. The whole exercise was only over a period of 3 – 4 years and then the Nursery Wood was abandoned and the trees left to their own devices.”

Please  send in your comments on the experience of these woods and the use of the QR codes too.

The area around  the shops have seen many changes over the years. The Nursery opposite was the Nunthorpe Library some years ago.

Where the apartments are located used to be a garage. The hunt is outside what is now Godleys Cycles but used to be Gjertsons

What is now the Spar shop used to be a separate Post Office and  Hintons, the first supermarket in Nunthorpe. Here are some pictures 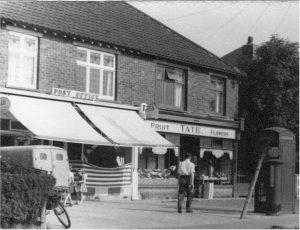 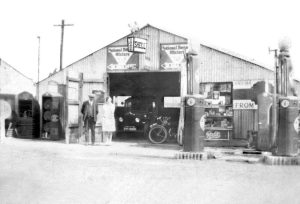 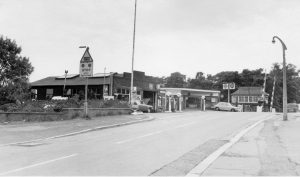 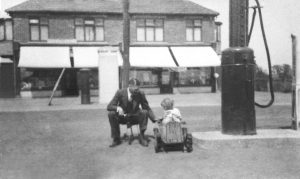 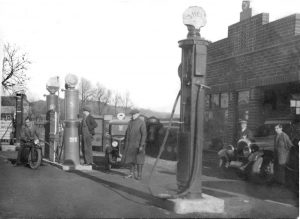 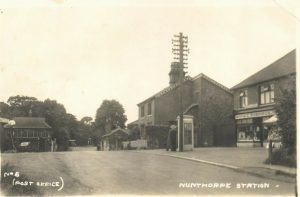 The Middlesbrough & Guisborough Railway (M&G) was a railway line serving the towns of Middlesbrough and Guisborough as well as areas of the Eston Hills in North Yorkshire from 1853 through to 1964.The M&G was backed by the Pease family, one of the major iron ore mine owners. It was one of two railway schemes (along with the Cleveland Railway) competing for the mining business in the area. It was promoted by the Stockton and Darlington Railway (S&DR), which worked the line and absorbed it in 1858. See plaque below still on the wall of the station)

The line had been  opened in 1853 to an iron ore mine at Cod Hill, and passenger services started a year later, stopping in the villages of Ormesby, Nunthorpe and Pinchinthorpe, before terminating at Guisborough.

A brief history of the Station http://bit.ly/NpeStnhistory 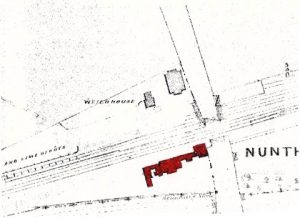 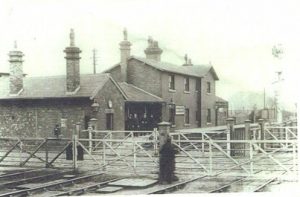 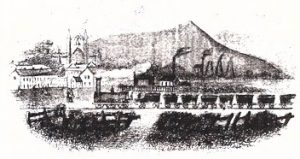 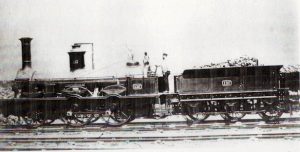 This triangle between Guisborough Road, and Marton Moor Road has seen many different activities over the years and Wards of Nunthorpe – was a paper shop selling ‘sweets and cigs’ a sign used to say. It was, for a while a Spar shop,  later became Rookwood News and is now The Beautiful Shutter Company. The last picture is Connaught Road some years ago! 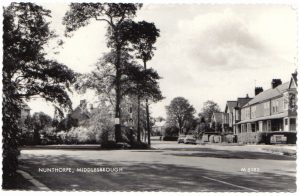 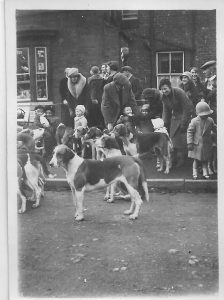 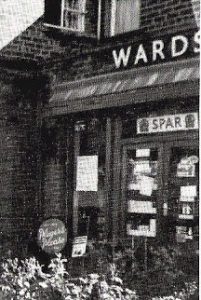 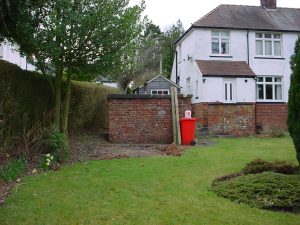 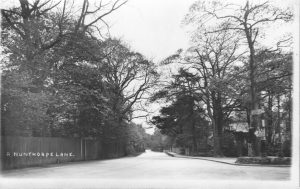 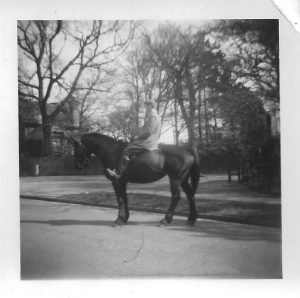 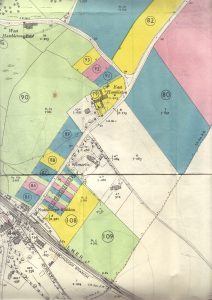 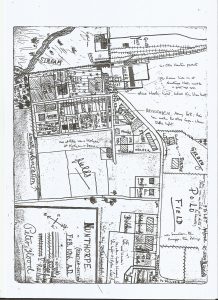 Join one of the sports clubs or the Recreation Club https://www.nunthorperecreationclub.co.uk

A variety of sports are played here with numerous football teams, a very successful squash club, tennis, athetocs and cricket.

The Recreation Club has facilities too with a bar, pool table and entertainments on a regular basis ( prior t Covid!)

These fields used to be a polo field! (see map opposite)

‘ 1911.   Records indicate that Nunthorpe station staff handled 349 polo ponies. These were then ridden down to the polo field

1965  Lady Harrison of Red Cottage donated 8.75 acres of her land on Guisborough Road to the communities of Nunthorpe, Marton and part of Ormesby for use as community playing fields.’

These sports fields are what was the polo field originally.

The bench is made of larch, which is softish when harvested  and thus relatively easy to carve, but the wood becomes tough as it dries out. Larch is often used in the making of traditional boats as a result. 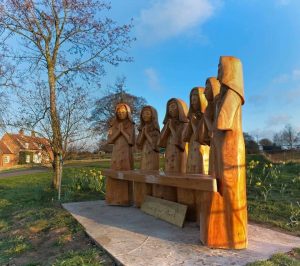 The history of the name and so the iconic nature of the sculpture is due to the fact that Nunthorpe has its roots as a Thorp – a Saxon name for a small settlement near a larger one ( in our case Great Ayton and was recorded as such in the Domesday Book) but became Nunthorpe as below.

It seems that Nuns settled in the village in 12th century were not the best behaved although they apparently came from distinguished families. So Nun was added to Thorp and became Nunthorpe. It is rumoured that a ghost of a nun walks the grounds of Nunthorpe Hall!

Adam de Brus  – a descendant of one of William the Conqueror’s followers, was Lord of the Manor and gave permission for the founding of a nunnery at Hutton Lowcross in 1162, close to Guisborough Priory. The convent consisted of a prioress and eight or nine nuns, but they quarrelled and a nuisance to their neighbours and were resettled at Nunthorpe . They had a small priory and a mill though the site is unknown but again they ‘misbehaved’ including horse stealing, and were eventually sent by the ecclesiastical authorities to live in Baysdale. .

Adam de Brus was a forebear of  Robert de Brus of Scotland. The Brus family had a castle at Castleton and another near Yarm. The lane between the two castles became Brass Castle Lane which runs west from Dixons Bank.

‘Triangle Wood’ – ourGreenways, supported by NPC,  initiated discussions about the wood ( triangle shaped – we need a proper name – we would welcome your ideas ) which is on your right as you enter Church Lane from Stokesley Road. The wood was used many years ago by the Scouts when there was a Scout hut nearby and its currently owned by the Council. It’s been  agreed that we can take this wood on the basis of a peppercorn rent. Some further work needs to be done to finalise details, but a short survey and conversations with  residents in neighbouring properties, has indicated their full support for this  proposal. Look out for more details 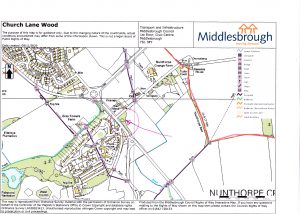